Well this all started last year after replacing batteries and adding 600W of solar.  That was about all the solar we could fit onto the existing bimini.We did not want to increase the size for fear of spoiling the lines of the bimini/flybridge.  Also Krogen had advised us to keep the weight down low if we wanted to improve sea keeping (reduce or at least minimize roll) and we already have the Whaler and Steelhead davit and a couple of Kayaks up there. We did think about replacing the bimini with a hard top and may do that in the future if we can figure out how to keep the weight down and keep the lines attractive. In the end we opted for lightweight flexible panels. The entire array weighs about 25-30 pounds. Following the solar panel install we started to monitor and see just what we can get out of 600W. We were impressed, even with partial shading and not always full sun days, clouds etc. we are realizing 140-180 Ah on an average day. That got us thinking, OK that will not run the boat, we average 400 Ah per 24 hours at anchor, but........what if we could use less power?  The biggest draw by far was our domestic GE frost free refrigerator, followed by the domestic wine cooler and then the entertainment system, all were running on 110V AC thru the inverter. The refrigerator alone would draw 18-20 DC amps and 35 Amps when the defrost cycle ran. The wine cooler would draw 16 Amps but cycled less frequently, still such a big draw we seldom run it at anchor.

So after some research we decided to convert the appliances to more efficient marine units. Not as easy as it sounds since that meant serious teak work and modifications in the galley. The new refrigerator is a Vitrifrigo DW360 and the new wine cooler is also from Vitrifrigo.  Both run on 12VDC, they also run off 110 VAC when that is available. The refrigerator with both compressors running draws 8 Amps at 12VDC. We hope that the design with the increased insulation cycles less frequently than the GE and since there is no defrost cycle we could hopefully at least cut our refrigeration power consumption in half. If that becomes reality then we could see our 24 hour power consumption drop to 250-280 AH.  That would mean with the new battery bank (FireFly 880AH) we may only need to run the generator every 3rd day in the morning for 1.5-3hrs. Make water and do laundry, charge batteries, etc. So that would be a huge reduction in generator time all the while increasing battery life potentially by a factor of 3. Battery life is proportional to the number of cycles, if we cycle once in 3 days instead of  once every day we should dramatically increase battery life. There is a caveat here, the new refrigerator is 10.5 cubic feet, the old GE was 15 cubic feet, so in theory we loose nearly 30%. Sylvianne feels that the layout of the Vitrifrigo is more efficient space wise, hope that proves to be the case.

We both can see the new challenge, making water. We now make 35 gallons an hour but if generator time is reduced by 3X we are making 3 times less water. The laundry uses 30 gallons just to do one load. We found a high efficiency front loader that will do 9 lbs of laundry on 8 gallons or a full 18lb load on 16 gallons! Yep you can already see where I'm going with that, we are already planning on next summer's upgrades.

We hired Ultra Yacht Refit, Micheal Coddington, to mange the project, the following photos are from Micheal as he continues to update us, all this work is being done in Antigua while we are home in Canada. 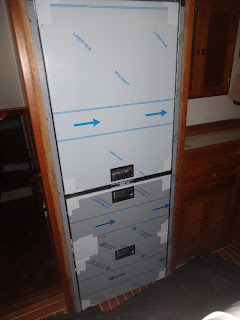 This is the new Vitrifrigo DW360, the top refrigerator compartment has a traditional side opening door, the bottom two compartments are drawers, the top drawer is a freezer the bottom drawer is for beer! This a test fitting, the unit will be removed prior to varnish work. The entire unit fits flush so we gain space in the galley, also this DW360 has the new recessed latches that are secure underway for those extra lumpy crossings. 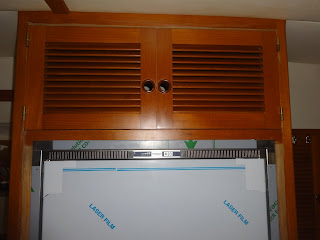 Now this was one of the issues, the new refrigerator is slightly wider and slightly taller, that meant the frame and upper cabinet needed modification. 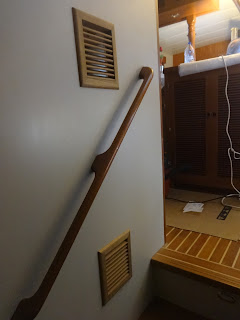 New vents for the refrigerator in the companion way, not yet varnished. 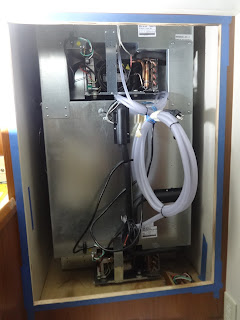 This is another bonus, the refrigerator backs onto the guest state room. there was a mirror here. we stole this idea from Alizann. Marty and Suzanne opted for marine 12VDC refrigeration on their boat when they ordered it. Since like our Vitrirfrigo these marine units are not as deep as the GE we gained some space behind the refrigerator. The Tucks had a medicine cabinet installed, brilliant! We are doing the same, this is the rear view of the DW360. 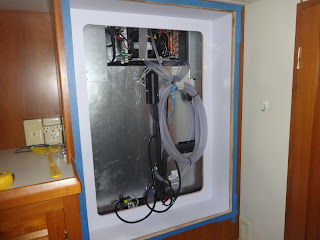 Another view of the back of the DW360 and medicine cabinet, we will have a removable panel so that if we need to get at the compressors we will have access from here. The companionway vents are also removable to access compressors for cleaning etc. This medicine cabinet will become Sylken Sea's pharmacy, that frees up space in the Salon for other uses, never have too much stowage! 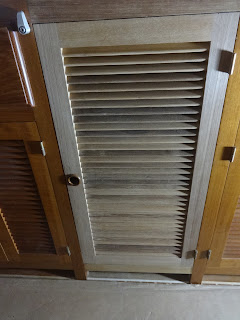 This is in the galley where the wine cooler used to be, now a cabinet (pre-varnish). The wine cooler has been moved to the "hutch" next to the pantry. I don't have photos of that yet. Next week I am off to Antigua for a week of boat projects and then I should have another update.

All for now, keep warm, freezing cold here in Ontario -12C the other nite and SNOW!

Posted by Ken & Sylvianne Roberts at 23:04 No comments: